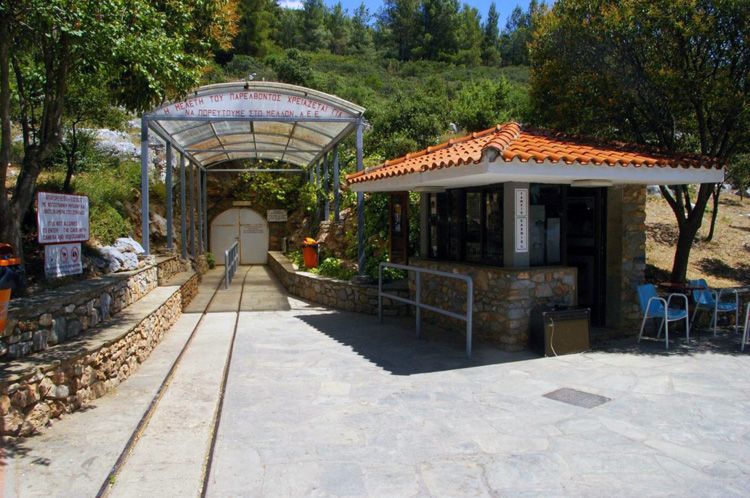 A magical journey into the past

Τhe cave of Petralona is one of the most important monuments not only of Halkidiki but the entire country, which is visited by many people, of all ages. Located in Moudania district in Chalkidiki, about 50 km. from Thessaloniki and 1 km. from the village of Petralona. It spans an area of 180 acres, is open to visitors and on the site operates an Anthropological Museum. The cave is known mainly for traces of people of about 700,000 years old, the oldest European ancestors that have been found so far. 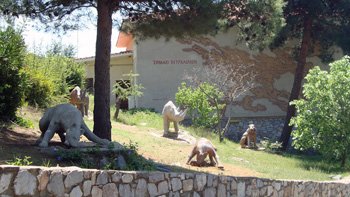 The history of the cave discovery started accidentally in the spring of 1959. Philip Hatzaridis of the Petralona village while looking for water spring on the hill "Katsika" discovered a slit of the rock. From there his fellow villagers went down with ropes and were amazed to face a unique miracle of nature. A year later, another inhabitant of the Petralona community, Chris Sarigiannidis, found the famous skull of an ancient man, the Archanthropus (i.e. an archaic Homo sapiens). After that, professor of anthropology Aris Poulianos takes action. The cave was by then known worldwide. It was, as was said then, the home to the oldest European citizen and of unique natural beauty. The findings are 700,000 years of age, and of great anthropological interest.

Aris Poulianos started systematic excavations in 1965 and soon announced that the Archanthropus of Petralona is 700,000 years and that he is the archaic form of the modern man. He discovered fossils of extinct today animals, such as lions, hyenas, bears, panthers, elephants, rhinos, megakerous, bisons and various species of deer and horses, as well as 25 species of birds, 16 species of rodents and 17 species of bats. In his publications prof. Poulianos writes of stone and bone tools. The findings are certainly important and are the first evidence of habitation of the Greek geographical area.

From an anthropological point of view the fossilized skull is a very important finding, but there is no consensus of experts for its dating and its evaluation. The main views diverge significantly and the skull is considered as belonging to a man who either lived about 700,000 years before the present day or about 200,000 years.

A tour inside the cave 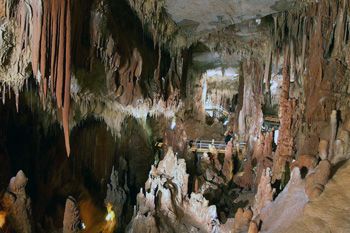 When you enter, to the right and left of the walls of the tunnel are displayed cases containing stone and bone tools and bones, jaws and teeth of various animals. The temperature inside remains constant at around 17 (+1) degrees Celsius in winter and summer.

A few steps and you will see a representation of the archanthropus. How our pre-ancestors lived in the cave. To the right in the same room, under a transparent plastic, there have been discovered and remain in their place horse bones, one deer jaw, a wild ass's jaw and a palaeolithic tool made of quartz. 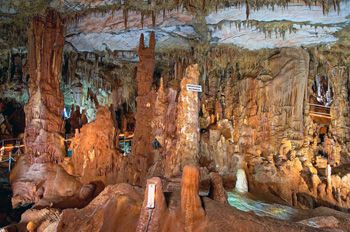 In the "Hall of Aristotle", dedicated to the philosopher, were found during the excavations many fossilized bear bones. It is likely that the archanthropuses sometimes found them hibernating in the cave, killed them and then ate their meat, also using the skin for clothing, bones for the production of bone tools etc. Here you will see a sculpture of a bear.

In the main and largest room of the cave in a depth of 30 meters, a part of a skull of a young Archanthropus was found.

In the "Hall of the Mediterranean", to the left is a representation of a fire. There were traces of fire from burnt bones and ashes dating in 700,000 years ago and represents the oldest fire lit by human hand on Earth (the original ashes are exposed in the Anthropological Museum). At this point, the visitor of the cave can also notice around the cave walls and above the stalagmite floor, many stones soldered with stalagmite material.

The last section is the "Mausoleum", which is the drier and warmer room of the cave. Here the skull and the skeleton of the ancient man was discovered, who was a male and had a height of 155-157 cm. He died at the age of about 30-35 years, well elderly for his time, since the average age ranged then between 18 and 20 years. Around him were scattered animal bones, food waste, many bone needles and traces of fire. The facial features of the ancient man of Petralona testify the oldest ancestor of Europeans to have been found to date.

A tour of the Museum of Anthropology 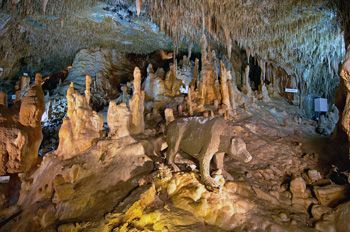 The bulk of the cave findings are set forth in the exhibition hall of the Museum of Anthropology that has been built next to the cave. The museum impresses with its wealth. In the center of the room there is an actual representation of the site where the skull and bones of the ancient man were found. A total of 400 showcases are exhibited, with bilingual explanatory signs for more than 2500 findings.

When entering, the visitor sees in the hall a wall painting, which shows the scale of the evolution of life according to Aristotle. In the exhibition hall, there are fossils from the excavations of the Anthropological Association of Greece, coming from open sites (Triglia, Eordaia etc.), where traces of ancestors of the Archanthropus are identified from the pre-cave period. Here are the findings from the cave itself (including stone and bone tools, fossilized bones, traces of the oldest fire ever lit by man's hand on Earth), and for comparison, some Paleolithic, Mesolithic and Neolithic tools from different regions of Greece, but also some similar findings and casts from other countries. 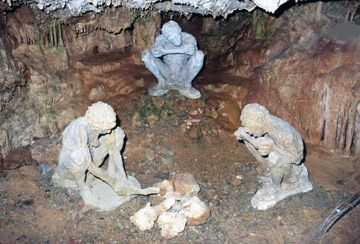 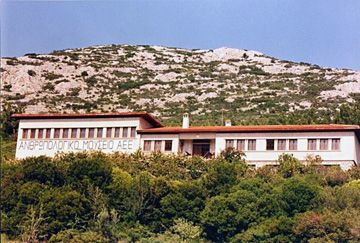