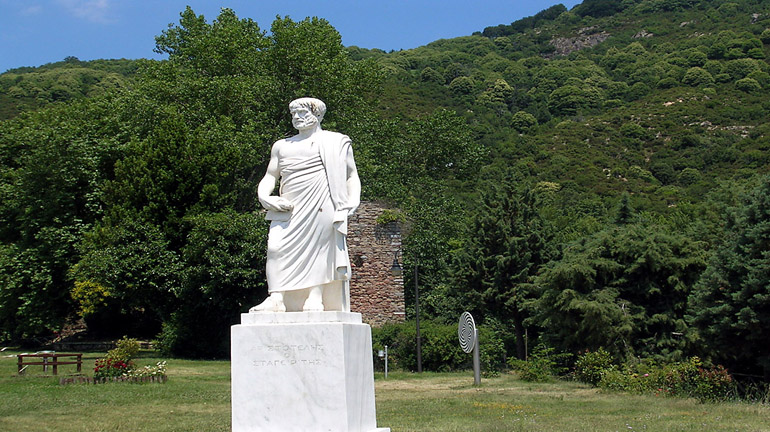 Aristotle's park is in Stageira. The theme park is in an important area with great view over the bay of Ierissos and the entire peninsula of Mount Athos.

It is equipped with a number of interactive instruments that show the phenomena of nature as they are referred in the work of the famous philosopher known as "The Natural." These instruments are. Solar clock, lens, compass, pentaphone, optical disks, pendulum, water turbine, inertia spheres, parabolic reflectors, telescopes.

Acanthus is the most important ancient port city of northeastern Chalkidiki, a former colony of Andros. It was founded in the mid-7th century BC taking the place of a prehistoric settlement. The city lies in a coastal barrier 600 meters southeast of the village Ierissos and was excavated by the XVI Bureau of Culture and Antiquities.

Parts of the walls, including an impressive section of the citadel, have remained scattered as well as architectural parts, like buildings, mostly from the Classical and Hellenistic times. The cemetery occupies the coastal zone of Ierissos, was used in the 7th and 6th century BC and has about 9,000 graves.

The ancient city of Mendi built in the middle of the Kassandra peninsula, was probably a colony of Eretria, around the 8th BC century. It was reported by Thucydides as a colony of Eretrians. It took its name from the local herb Minthi, a kind of mint. Mendi flourished in the 6th century, which is evidenced by the wide circulation of its currency and export of wine.

The excavations in the area unearthed the ruins of the citadel, where there were ponds, pits that contain ceramics and other objects. Archaeologists also discovered parts of residential streets, dating from the 9th to the 4th century BC a cemetery, vases, and the Temple of Poseidon at Cape Possidi.

Potidaea the ancient Doric city, was founded around 600 BC by Corinthian settlers. From a number of excavations ancient layers were revealed of ceramics and valuable building relics and classical era tombs of Athenians. From the Hellenistic and Roman Kassandria remains of the fortifications are saved, the buildings and cemeteries, the most important recent finding being, a unicellular Macedonian tomb. Today on the ruins of Potidea New Potidea located.

Located about 500 m South East of the current settlement of the Olympiada, on a small, mountainous and beautiful peninsula called “Liotopi”. The city was founded in 665 BC by Ionian settlers of the island of Andros, and shortly afterwards settlers arrived from Chalcis. It is the birthplace of Aristotle, the greatest philosopher of antiquity, the teacher of Alexander the Great. Over the last decade, systematic excavations and restoration have created an important archaeological site, near the community of the Olympiada, the village that now stands near the ancient Stageira and have brought to light significant findings and information on the birthplace of Aristotle.

A Seaside village, southwest of Sithonia, lying between New Marmara and Porto Koufos. It has developed in recent years. It is located 23 km from New Marmaras. It has a long coastline and clean sea, and it is considered as one of the most beautiful villages in Sithonia.

Founded by settlers from Chalcis in Euboea during the 8th-7th century BC and was part of the Athenian alliance. In the region archaeologists found traces of prehistoric settlement of the 3rd millennium BC. In 480 BC, the city helped the Persians against the campaign of Xerxes against Greece, and a few years later was a member of the Athenian alliance. During the events of the Peloponnesian War, according to Thucydides became a battlefield between Athens and Sparta. Monuments are Toroni are the castle of Lykithos and the early Christian church of St. Athanasius, basilica of the 5th century. The church was destroyed by fire in the 6th century and in its place another, smaller temple was built.

Ancient city of Halkidiki, situated in a fertile plain near the bight of Cassandra, 4 km from the sea. For a century, it was the most important town of Halkidiki. Archaeological findings show that at the city's location there was a significant prehistoric settlement, where later on became the city of classical times. It took its name from a pre-Hellenic era (Olynthos means wild fig). It was inhabited since the Neolithic era.

Herodotus reports that Bottiaians of Imathia had settled in the 7th century BC in Olynthus but were forced to flee the area by the Macedonians. In the archaeological site of ancient Olynthus operates a Museum. The purpose of the museum is to give a complete picture to visitors on the history of the ancient city and to describe the excavation and restoration. All this is done solely by audiovisual media.

Ancient Sanctuary. The lifetime of the sanctuary starts from the late archaic era to the Hellenistic and its history is connected with the two ancient cities of the region, Sani, a colony of Andros and Ouranoupolis city founded in 315 BC, by Alexarhos, brother of Cassander, king of Macedonia. In the late sixth century BC Alexarhos and the residents of Sani founded the sanctuary outside the city walls. In the late fourth century BC when Alexarhos founded Ouranoupolis he included the sanctuary in the new city. During the excavations in the sanctuary findings were discovered, such as stone pile with traces of burning rituals a marble head of the Sun, marble head of a girl, a bench built along the temple, Corinthian clay roof tiles, and more.

The cave of Petralona

The Petralona cave was discovered in 1959 by residents of the village looking for water. It is adorned with stalagmites and stalactites and has been developed on the west side of the mountain katsika, 300 meters above sea level and became internationally known when inside was discovered the skull of a man aged about 25 - 35. The investigations conducted by Prof. Aris Poulianos demonstrated that he is about 700,000 years, which makes him the oldest of European descent.

Among the fossils of extinct animals that were discovered, are included lions, hyenas, bears, panthers, elephants, rhino, bison and various species of deer and horses, as well as 25 bird species, 16 rodent species and 17 species of bats. The cave is open to the public, which can be visited daily. A museum also operates with exhibits, a mural painting depicting the scale of the evolution of life according to Aristotle, fossils, and artifacts such as stone and bone tools, bones of the oldest traces of fire that ever lit the hand of man on Earth. More information at: www.petralona-cave.gr

The entrance to the cave is allowed daily from 9.00 am to one hour before sunset.